Here you’ll find a list of a few breeds of chickens commonly kept by kiwis, breeds that can often be bought at your local stock sales or online websites such as TradeMe.

Different breeds of chickens were developed for different purposes.
After maturity hens often lay the largest amounts of eggs in their first year, and then decline year after year from then. Certain hybrids were developed for their laying ability, such as the Hy-Line or NZ’s Brown Shaver. Others, like the Cobb, were bred purely for their fast maturity rates – for their meat.  Some breeds are what people refer to as “Dual Purpose Birds” – these are Chickens that are suitable for eggs or for the table.

Then there are the larger rare breeds like Barnevelder, Plymouth Rock and Orpingtons – which have more meat and larger eggs. Smaller breeds and bantams – like the Silkies and Sebrights, which lay smaller eggs and were not developed for meat as they’re more of an ornamental bird.

Don’t forget that ordinary farmyard chooks, which are usually cross-breeds, exist too and are often a cheaper alternative if you’re on a budget.

Contact us to donate breed photos or suggest a breed to add to our page here.

A fantastic light breed that originated from Ancona, Italy. They are excellent layers of small to medium very white eggs. They come in one colour only which is pictured left. Fairly hardy birds. Can be a bit flighty but an excellent forager. 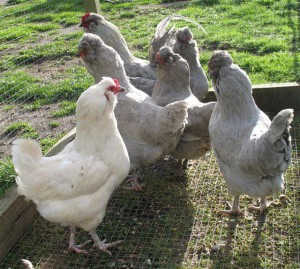 There are several colour variations of this breed available, the most popular in New Zealand is the Lavender Araucana. Originally they were developed in Chile and are an excellent layer of fantastic bluey green eggs of a medium size. They are an average size bird that are fairly hardy.

Are a large breed developed in Holland as a dual purpose chicken. Traditionally these chickens laid dark red/brown eggs for which they are widely known and are a hardy, good layer. Fairly common in New Zealand now.

The most common Belgian breed in New Zealand. A smaller but very attractive breed. Starting to gain popularity. There are two colourations of this breed. The Gold (see right photo) and the Silver. Fairly good layers of a smallish white egg. Excellent foragers and can sometimes be flighty.

An Italian Breed that was imported to Britain in the 1800’s. Originally developed as a meat breed but they are now a robust, dual purpose bird that is a good layer of white to cream eggs. Not very common in NZ but they are a very docile breed that comes in a few different colours with Silver/Grey being the most common.

There are three colour variations of Leghorn common in New Zealand. The white Leghorn (see right photo), brown and also black. Leghorns are one of the more popular breeds around the world. Highly regarded as an exceptional layer of large volumes of medium to large pearl white eggs. They are a fairly hardy breed, however the roosters combs can be frost sensitive. 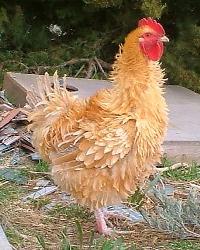 Frizzle’s are a type of chicken with feathers that curl outwards. Some New Zealander’s see them as a separate breed, others see them only as mutations as Frizzles can appear in almost every breed and colour. Primarily a show bird. Photo supplied by Andrew D.

A medium sized bird. Developed for egg laying in Holland prior to the 1700’s. The Silver Spangled colouration is the most common of about 10 different varieties. Another excellent forager, tends to be a bit flighty but a good layer of medium white eggs. 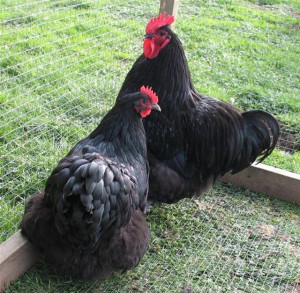 Many colour variations of this breed are common in New Zealand, a popular colour is the Black Orpington (see right photo). They are a hardy, large dual purpose bird that lays medium to large light brown eggs. 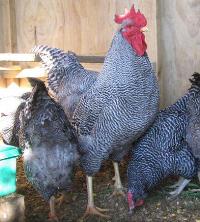 Are a large dual purpose breed of chicken developed in the USA which are quickly gaining popularity in New Zealand. The Barred colouring is by far the most popular of the seven varieties. They have striking feather colouration, are a fairly robust and hardy bird, and are an average layer of large, light brown to almost pinkish eggs. 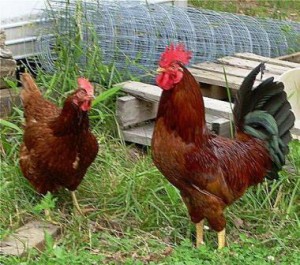 These are two other popular dual purpose American breeds in NZ and are fairly heavy breeds. They are closely related, with the main difference being the lighter colouration of the New Hampshire. They are a good layer of large light brown eggs. Fairly hardy and robust birds.

Originally from the Island of Sicily this breed has been around for about 1000 years. Not a common breed in New Zealand. They only come in one colour variety and the NZ stock seems to differ in colour to that of the original Italian breed (See right photo). Excellent layers of a smallish white to cream coloured egg. 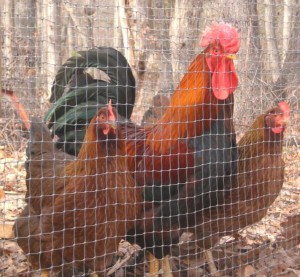 Originally developed in Holland in the 20th Century. They are a hardy, large dual purpose bird that lays rich dark brown to almost terracotta coloured eggs. There is only one colouration of these birds which is Red Partridge pictured left. Harder to come by in New Zealand but slowly gaining popularity.

The Sussex breed was originally developed in England as a dual purpose bird. An Average layer, that lays medium to large creamy white eggs. They can tolerate colder conditions. It is becoming increasingly popular in New Zealand. The most common Sussex colouration is the ‘Light Sussex’ – a white chicken with black feathers on it’s neck, wings and tail tips.

Another US dual purpose breed that is becoming increasingly popular. The Silver Laced colouration is by far the most common of about 10 different varieties. They are fairly hardy birds that lay light to rich brown large eggs.

The Araucana and the Orpington Breed photos were kindly donated by Sandy at www.poultryvalleylifestyle.co.nz 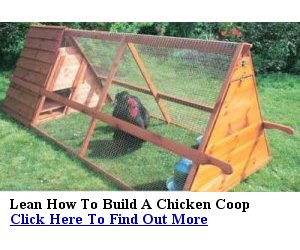